I traveled from river side to hilltop,

and, perhaps inevitably in South West Scotland, I encountered the magnificent work of Andy Goldsworthy. 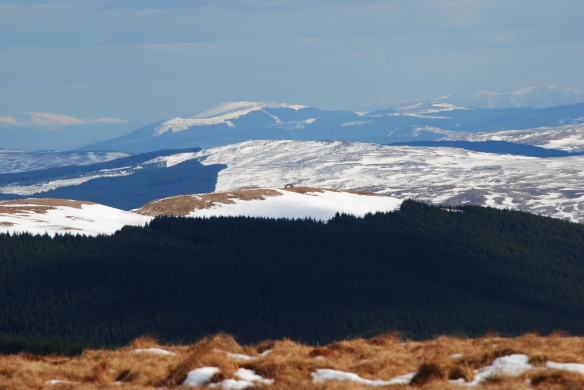 A long walk along snow covered forestry tracks, frozen burns hiding in the shadows, took me to one of the red sandstone arches (each comprising 31 blocks totaling 27 tons) constructed on three inter-visible upland locations.  The Striding Arches website is a great resource where you can get further information but I would recommend, if at all possible, you take the time to visit as they only make sense experiencing them in there landscape.

Before I visited I had not appreciated that Goldsworthy’s work blends with the work of two other artists within the Cairnhead Community Forest.  Along the Dalwhat Water riverside are, The Hill of Streams letterboxes by Alec Finlay : also complemented by audio-files of the varying sounds of the different confluences.  While the artwork at the Bothy, also comprises some beautiful detailed stone carving by Pip Hall that presences the earlier names of the settlement and some of those who once dwelt there.

Inside the Bothy I was intrigued to discover a dirty acetate sheet with a concrete poem printed on it. 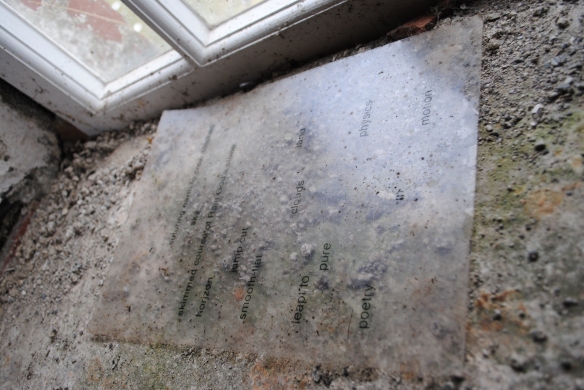 It seems fair to let the found poet have the last word: 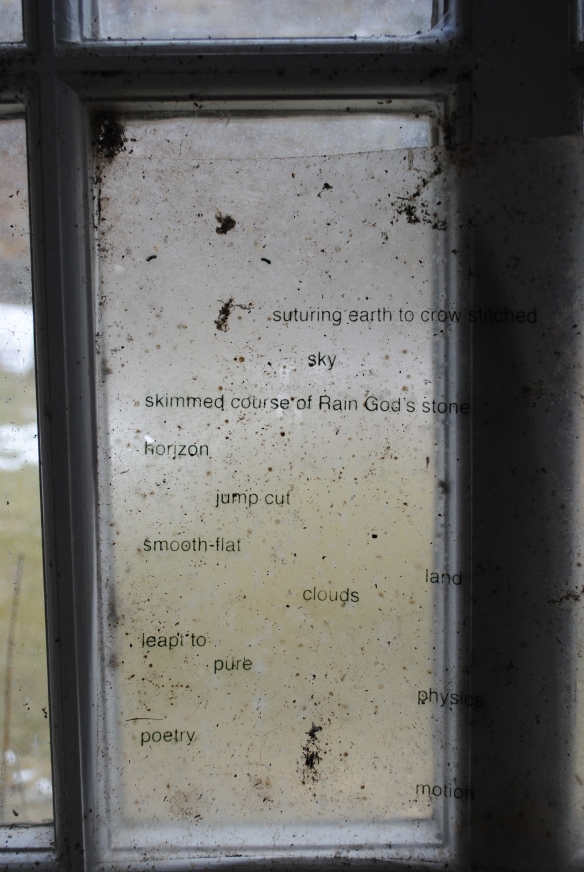 Coincidentally, there has been another recent post on Striding Arches at ECOARTS which is worth looking at too.

The Bothy Project is transforming a stalled space in Glasgow: the site of a Glasgow City Council Cleansing Department building.  I first stumbled across the space three years ago and had not been passed it since. 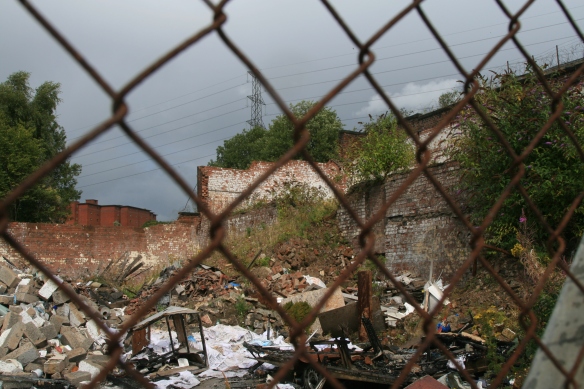 Returning from The Whisky Bond (the red brick building partially seen in the distance), I was drawn to the space again by the presence of a newly painted wall.

A shipping container is being converted into a studio space for artist residencies, with exhibitions in the walled garden. I really look forward to seeing what else happens in this newly emerging place (they were building a great looking pizza oven today !).  It already looks like its going to become a great example of how a stalled space can become a creative hub.

For some reason I thought this site would be easy to find. I remember being amazed when I first heard about it, and that it was only (re)discovered in 1986.  Since then I have read about it several times, and day dreamed about seeing it many more.  Why ?

Because it comprises a significant concentration of prehistoric rock art (which I always love seeing !) and in contrast to many others I have seen (which are usually on more horizontal or sloping outcrops of rock) I knew it was an almost unique example of prehistoric rock art on a vertical cliff face.  It is special and I could not wait to finally meet this site…

but in my haste (and arrogance not checking my map properly first !) I found myself plunged into a world comprising river gorges and quarries: a startling blend of natural habitat and cultural legacy.

On the rock faces, are modern embellishments,

Poignant, earlier commemorations, with at least two inscriptions, to soldiers from the Gordon Highlanders, 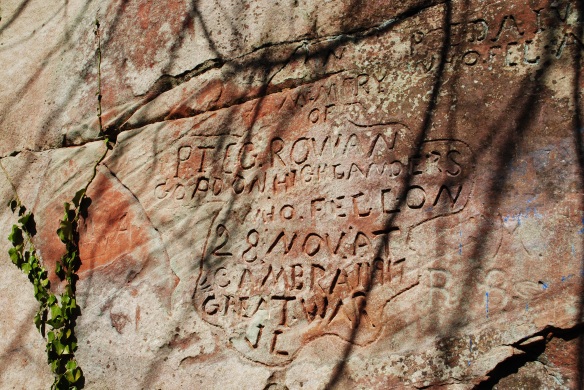 And hints at possible earlier activity* leaving marks on the rock… 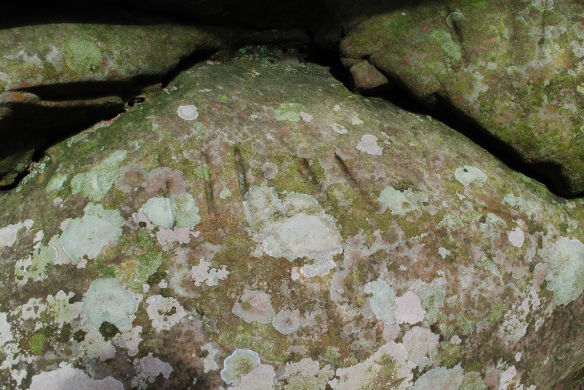 *the grooved lines are reminiscent of a Polissoir (a rock used for polishing stone axe heads c 5500 years ago) but of course there may be other explanations !

As well as this variety of signs marking the red sandstone cliff faces, a more substantial legacy of past activity can readily be found.  Testimony to when, lines torn across our landscapes, great iron beasts spewing smoke needed to span the gorge of the River Ayr.  Still dominating one portion of the river gorge is the Ballochmyle Viaduct (when constructed the widest stone arch in the world) which was built between 1846 and 1848 to take the Glasgow to Carlisle (Nithsdale) railway line.

It is largely built of red sandstone quarried from nearby.  In amongst the woodlands, you can find the substantial vertical walled spaces from which these sandstone blocks were quarried. 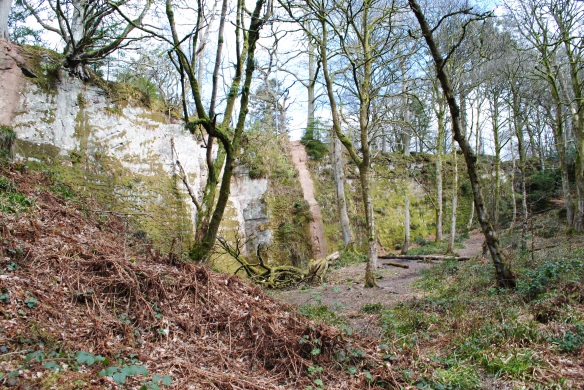 The more I looked amongst the sides of the gorge, the more I saw vertical faces in the rock which I thought were an ideal location for prehistoric rock art. 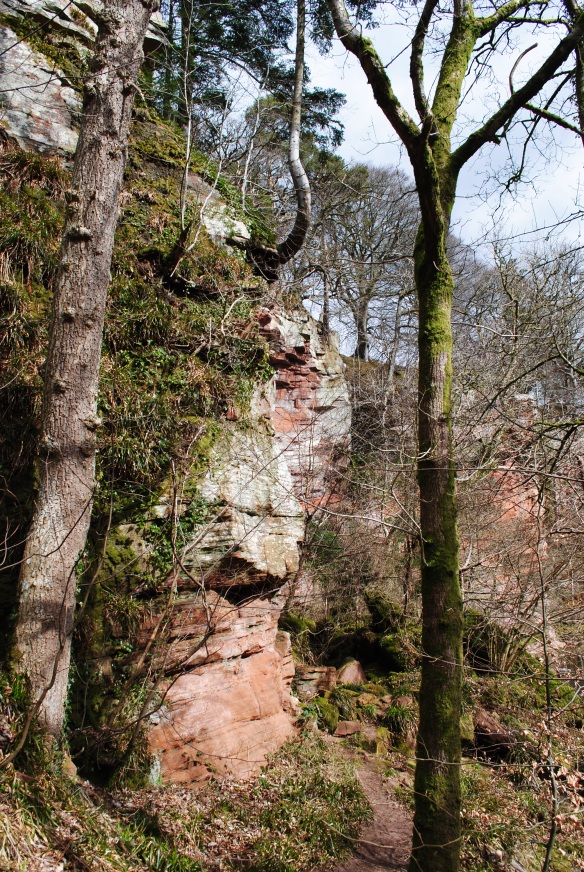 But alas no. In defeat, I returned to the car and succumbed to modern technology, checking on my phone the CANMORE entry for the site: which confirmed my growing suspicion that it was only a stones throw from where I had parked the car !

Take it for read that the prehistoric rock art motiffs (approximately c 5500 – 4500 years old) are remarkable…!  Following my earlier exploration, more striking, however, was the landscape context of the rock art and the evidence for later embellishment.

In terms of evidence for later activity at the site, intriguingly it has been noted by JG Stevenson that there is another partially legible inscription ‘…ASAID’ over the prehistoric rock art.  Intriguing because it is suggested that the inscription is in a raised Lombardic-style of writing, which implies it is Medieval in date.  There are also carvings thought to be figures of deer which may also be Medieval.   Stevenson also noted that there is an inscription of 1751 on one rock panel. He wonders if clearly visited in the 18th century why the site was not known to antiquarians (and lost till 1986):  but the stone remembers two previous visits to the site.

My visit left no trace but my exploration of the wider landscape in which the rock art panels are situated meant I departed with a very different understanding than if had I simply gone straight to them.  Before I visited, I knew the rock art at Ballochmyle was in striking contrast to many other examples from Scotland (which are often on hill sides with more open views.)  I could readily see from maps that Ballochmyle was situated up a minor tributary off a significant river, but as it now easily reached from a main road most people will encounter the site in this way.  If, however, approached by a river side journey (as may well have occurred in the past) the choice of location makes more sense. The drama of approaching the gorge, of traveling into a place where the light, sound and humidity is different.  A place with different levels of seasonal water flow may have been dangerous and difficult to navigate.

You then had to know (or be shown) where to leave the river side to follow up a minor tributary to reach the location of the rock art. Only then might you be allowed to view it.  What you could immediately see would depend on what time of day as the southern panel is on a dogleg, and partially separated by projection of rock, from the northern section: resulting in times when one side could be in sunlight and the other in shadow.  Perhaps if the light condition across the rock faces was deemed appropriate that was what determined whether you could add to the memories already inscribed in cup and ring markings many times before.  Only then, the sound of carving, stone striking stone, may have ricochet and echoed down amongst the stone faces of the gorge.

In the 19th century, there was another sound as the quarries crept closer to the rock art panels. There is only a distance of a few meters from the quarry face and where the Ballochmyle rock art (it could so easily have been taken away) had remained for over four thousand years.  Those working the quarry would undoubtedly have seen and respected the traces of memories on these stones but they appear to have kept quiet about them.

Still the River Ayr continues its journey, the murmur of water leaping and splashing, carving slowly deeper with time as it meanders through the old red sandstone.  A place of memories, sometimes forgotten by people, but the stone remembers…

The Glasgow Archaeological Society publication on Ballochmyle by Jack Stevenson ‘Cup-and-Ring Markings at Ballochmyle, Ayrshire’ can be found free on the EUP website.

The location of some of the sandstone quarries can be seen on the First Edition Ordnance Survey Map (surveyed in 1856; published in 1860) from the National Library digital map collection.  There is also a ‘Summer House’ marked in the woodland amongst a network of paths. On the Second Edition Ordnance Survey Map, (re-surveyed in 1908; published in 1909) the one closest to the rock art is annotated ‘Old Quarry’ suggesting it is no longer being used and the one closest to the viaduct has expanded, suggesting a deliberate avoidance of removing the rock art via quarrying in the later part of the 19th century.

Spirit of Scotland was the first stop on a recent journey through south west Scotland on which I explored some of its landscapes, heritage and art.

Spirit of Scotland is a sculpture set at the foot of Loudon Hill, a granite volcanic plug, and striking feature in the landscape from some distance away.  Loudon Hill is located at the head of the Irvine Valley, a strategically and historically important location and route way for some millennia as evident by the close proximity of a Neolithic long cairn (c 5500 years ago) and a Roman Fort (c 2000 years ago).

Spirit of Scotland by artist Richard Price was erected in 2004, by the Irvine Valley Regeneration Partnership, and is located on a pathway which runs through the Irvine Valley.  The piece is of fabricated steel and stands over 5 metres tall.  It is located in close proximity to the Battle of Loudon Hill, involving Robert the Bruce in 1307, and the words and imagery on the sculpture refers to another important historical figure William Wallace who was said to have won another battle here in 1296 : for further details see Historic Scotland’s Inventory of Historic Battlefields.

The cut out human form can be used to frame different views of the hill and the wider landscape beyond but it was the words on the sculpture, comprising three short phrases of archaic tone, to which I was most drawn.

On the front of it, reads:

on its other side

and on its inner arch:

Subsequent investigation suggests that two of the inscriptions appear to have literary origins: evoking a broader body of historical narrative and wider cultural associations.  The words from the side facing Loudon Hill (The Knyght Fenwick that cruel was and keen he had at death of Wallace’s father been) appear to derive from Blind Hary’s 15th century poem The Actes and Deidis of the Illustre and Vallyeant Campioun Schir William Wallace (simply referred to as The Wallace) which was the basis for The History of the Life and Adventures, and Heroic Actions of The Renowned Sire William Wallace by William Hamilton in 1799 (see page 51).  While the words on the inner arch ‘ At Wallace nam what Scottish blood but boils up in a spring tide flood‘ come from The Bard in 1785 in an Epistle to William Simpson of Ochiltree: which can be listened to from the link.  I am not sure where the third phrase (Thou saw’st the strong arm of a Wallace raised to stem the tide of alien tyranny) derives from, whether it is a modern evocation by the artist, or whether it has another direct literary reference ?  If you have any ideas please let me know.

The first stop on my journey through south west Scotland, demonstrated the tangled nature of landscapes with events of the past, literary and cultural associations, and dreams and aspirations for the future,

perhaps then it is the Spirit of Scotland…