Through Time and Stone,

I recently visited the Dunbeath Heritage Centre for the first time and was greatly impressed by the way in which art, archaeology and landscape have been blended.  A high standard of artistic works, which are particularly sensitive to the broader landscape and heritage, was on display.  Two contemporary sculptural stone pieces have been set into the floors and walls, complementing some of the artefacts on display. A contemplative shrine room has been created, with tiles by local potter Jenny Mackensie Ross, for a 7th century carved cross fragment: the Ballachly Stone.  There are two beautiful pieces of contemporary stained glass, and a powerful glass wall installation by Alexander Hamilton.  On the walls are black and white photographs of the wider landscape by Paul Basu.  The glass of the windows is etched with literary quotes, evoking the powerful landscapes of Caithness beyond.

To my surprise, however, I was most captivated by the floor.

It has been painted, by artist Tim Chalk, with the serpent river, as viewed from above by the buzzard,

and relates a range of places, which appear in the semi autobiographical novel Highland River by Neil Gunn, encountered by the main character Kenn when the Dunbeath Water is followed to it source.  The serpent head design is derived from an 8th century brooch found at Dunbeath in the 19th century.

So now I feel compelled to return to Dunbeath, explore the places alongside the serpent river, to journey to the source. 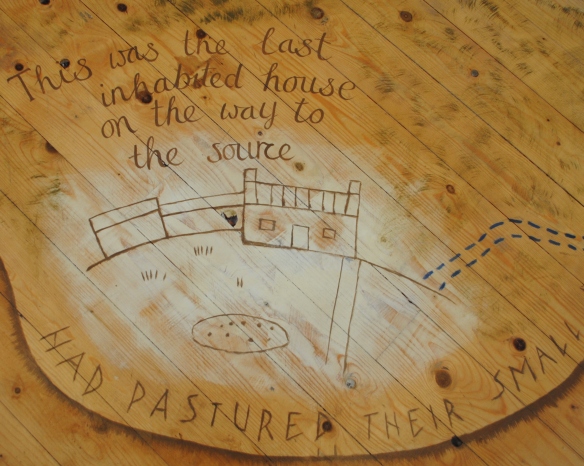 But I must confess, I am sorry to say, that I have not read Gunn’s works, so my dilemma is:

Do I go to this source of inspiration and read the works of Neill Gunn before I return, should I then carry the stories, characters and places when I eventually explore, do I loose myself in the literary landscapes first?

Or do I return first to Dunbeath, undertake the journey to the source, and then read Gunn’s works?

Perhaps this dilemma stems from a pretense about landscape.  A pretense that there is a possibility of my authentic experience, unmediated by other literary, cultural or historical references, of the landscape out there.  When the very joy of landscape is that our perception through our presence is an act of co-creation, mediated through our knowledge and our imagination, with the rich textures and legacies, people and places which went before us.

‘Within You Will Find The Spirit Of The River’ (N Gunn)

Neil Gunn spent most of his boyhood at Dunbeath and many of his novels engage with the different pasts of the landscapes and communities of Caithness.  You can get more information about and hear several short readings by Neil Gunn.  Dunbeath Heritage Centre is the old school house where Gunn would have been taught as a boy, where he may have sat during lessons and stared out of the windows at the landscape beyond.

My unexpected visit to Dunbeath Heritage Centre was greatly enhanced by the warm welcome I received from the manager and the time which they took to discuss things with me, many thanks.  I was very pleased to learn the displays were conceived by Paul Basu.  You can take a virtual tour of the Dunbeath Heritage Centre, there is also a wonderful explanation by Paul about the way it has been designed to create a dialogue with the broader landscape and its multiple perceptions.  But I would recommend if at all possible you visit in person and go explore Caithness where land, sky and sea meet so powerfully with the past. 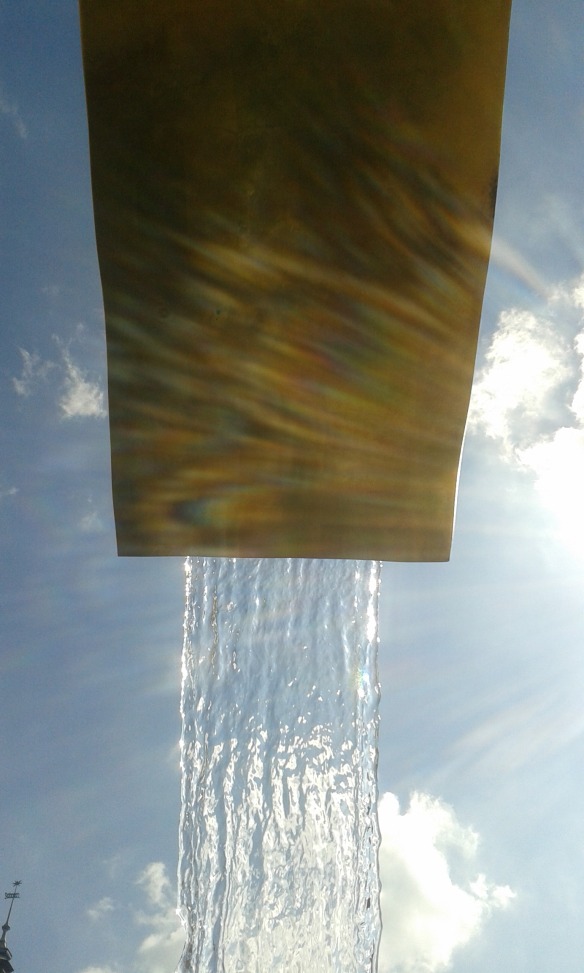 Beware This Is A Modern Art Meets Archaeology Mash Up Post.

Text reports on presentations at a conference session with interspersed images found on streets of Pilsen & Prague, Czech Republic. 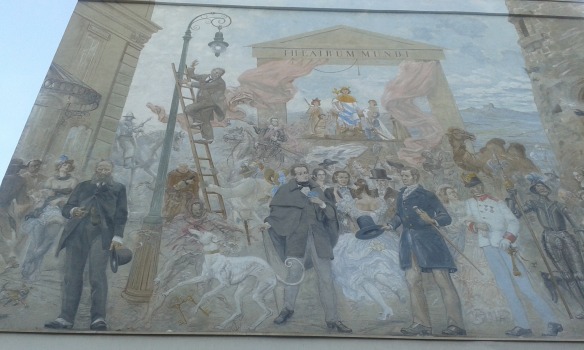 The presentations included Dragos Gheorghiu’s work on Artchaeology.  He presented examples of work in Romania which combined artistic modes of practice, reconstruction and experimental archaeology, and creation of digital environments which are blended to generate an augmented reality: ‘immersive transport to the past’.  One such example was the reconstruction at Vadastra of a fragment of the workshop of a Roman villa rustica and associated ceramic kiln, glass kiln and iron furnace. 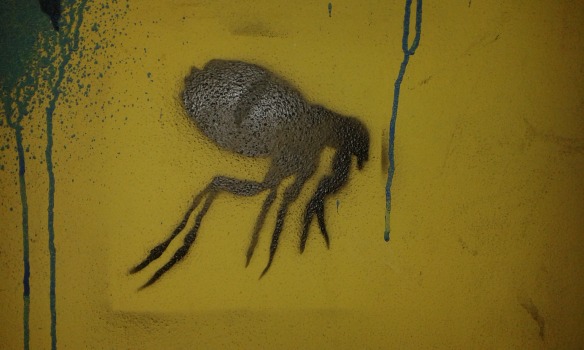 Artist Sebastian Walter explained the approach to the development of the Schoeppingen time-machine for the Schoppingen Art Foundation, Germany.  Part art, part interpretation, part archaeological synthesis, the piece presenced the past and future at 20 locations with timespies (Zeitspione).  A playful way to get people to reflect on their relationships with the town of Schoeppingen.

Curator Marko Mele discussed several art projects within the Universalmuseum Joanneum, Graz, Austria which had an archaeological component.  These included ‘A cross-departmental, pan-Styrian, polyphonic project’, entitled Super Eggs, by Simon Starling & Superflex.  In another, artist Sharon Lockhart, explored the The Beginning of Time in response to the palaeolithic remains from Repolust Cave.  This resulted in video installation and exhibition of the finds: in part a reflection on systematic archaeological practices.  Most powerful, perhaps, was the example of the installation VZPOSTAVITEV (Reestablishment), a piece outside the walls of the museum, by RHIZOM and e.d.gfrerer.  It was intended to promote awareness of an exhibition in the museum ANS LICHT GEBRACHT (BROUGHT TO LIGHT), as part of a cross border Slovenia-Austria exchange project InterArch-Štajerska.  The street installation comprised the creation of  a sculptural piece of 1200 sandbags in the city of Maribor, Slovenia, which was due to be moved through the city on three occasions.  However, the Vice Mayor of the city had the piece removed to a junk yard, which provoked protest until it was reinstated, ultimately in the form of a ‘bunker’ in front of the City Hall. 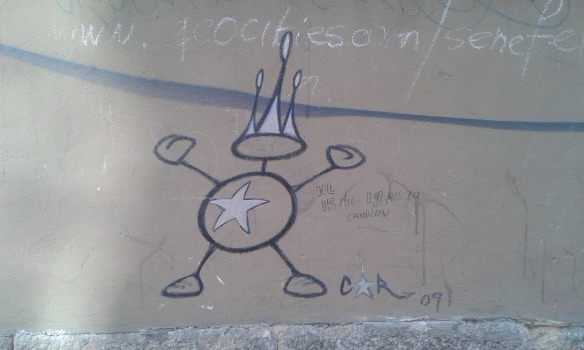 There was a great presentation by David Connolly (Connolly Heritage Consultancy) and Kate Sloan (Peter Potter Gallery) of collaborative work in the landscapes and sites of East Lothian Scotland.  Much of the collaboration relates to the Lost Landscapes project which: ‘traverses boundaries between art, ecology, archaeology and local history to explore historical ways of life through the lens of contemporary art’.  This has included a variety of exhibitions, such as Return to the Earth: The Poetry of Fragments, and Nicky Bird’s Archaeology of the Ordinary.  The Peter Potter Gallery continues to commission striking pieces that have been informed (at least in part) by archaeology and heritage, highlighted by the current exhibition WITCH by Liz Adamson and Alexa Hare. 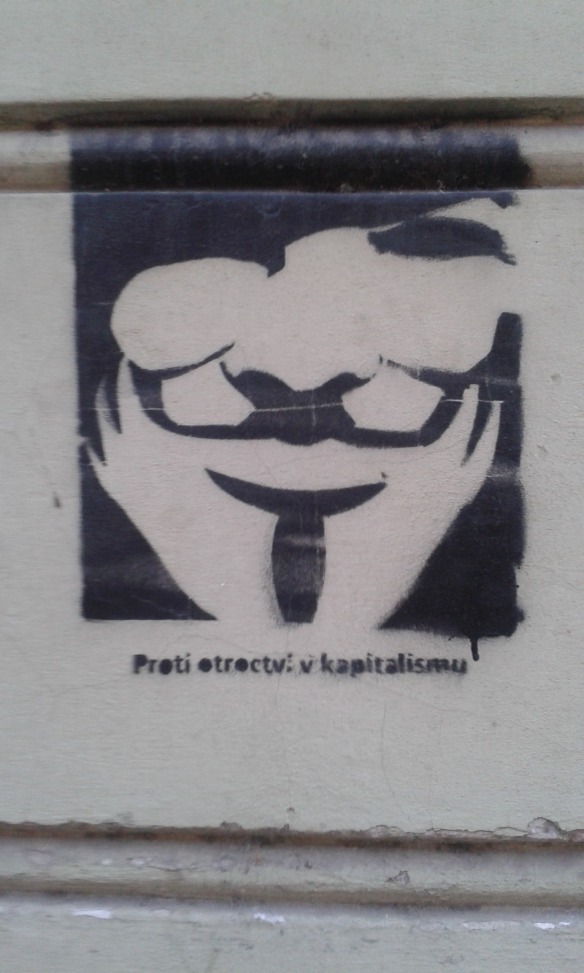 Archaeologist Anna Zalewska then reflected on her difficult encounter with two pieces in Poland about ‘The Archaeology of Crime’ in relation to the mass graves, such as Katyn, from the 1940’s.  In one case, there was an interpretative exhibition in the streets with photographs by Piotr Krol about Bykivnia which has witnessed several episodes of archaeological investigation and exhumation.   In another, case the challenging imagery of photographer Maksymilian Rigamonti presented encounters (e.g. Butterfly and the Bones) with the exhumation of victims : in part by an absence.  These encounters raised issues relating to the ethics of different aesthetics and subversive practices, which were explored further in the presentation.

Then archaeologists Rebecca Younger and Kenny Brophy explored several examples of replica Stonehenges from across the world.  These included the inflatable Stonehenge SACRILEGE by artist Jeremy Deller, the illegally constructed concrete Achill-henge, and the Stone Henge Aotearoa in New Zealand which was constructed to as an educational facility combining ‘modern scientific knowledge with ancient Egyptian, Babylonian, Celtic, Polynesian and Maori starlore’.  They reflected on how wide ranging the appropriation has been of a four thousand years old monument to create potent places with contemporary resonances.  For 76 examples see Clonehenge blog.

In a final presentation, the session organisors presented the preliminary results of interviews with six artists, Brian Graham, Markus Hofer, Louise Tait, Jeremy Deller, Paul Musgrove and Michael Jarman, about their relationship with archaeology in their practices.

All in all, an excellent and inspiring session, organised by Estell Weiss-Krejci, Edeltraud Aspӧck and Mark Hall, which clearly demonstrated the value of the ongoing conversation between archaeology and modern art.

Sawney Bean, the legendary Scottish cannibal, who is said to have lived in a cave on the Ayrshire coast with his family in the late 15th century: preying on over 1000 passing travelers.  Artist Adam McEwen’s ‘Sawney Bean’ exhibition at The Modern Institute playfully explores the mythology, materiality and geography of ‘Sawney Bean’ as mediated through personal biography.  Most striking perhaps is the poignant representation in graphite of a wooden coffin carrier found in a family barn on the Ayrshire coast.

For centuries people have been coming to the cave, a place of contemplation and prayer on the Machars.  Many have inscribed crosses, names and initials on the walls of the cave.  Some set coins in cracks in the rock which tarnish and slowly corrode. 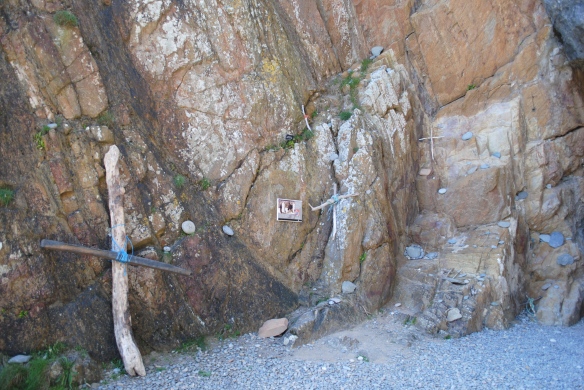 Others place stones with dedications on them, around the cave, and a few lean crosses against its walls.

To reach this special place traditionally you would travel along the pilgrimage trail through the Machars via Whithorn. This long association started with St Ninian’s mission in AD 397, then resulting in pilgrimage to a shrine at Whithorn from the 7th century onwards. 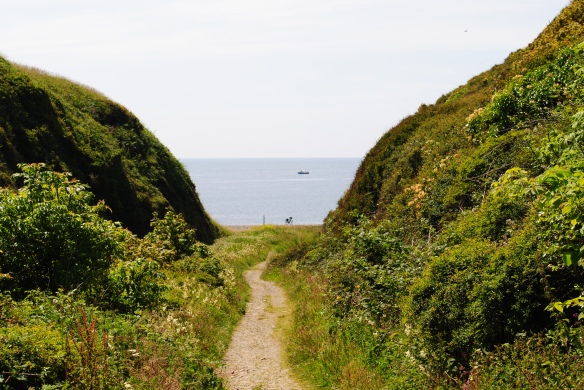 For there protection many of these important Medieval stones were gathered together at the museum in Whithorn.  For over 30 years The Whithorn Trust have been researching the archaeology and heritage of the Machars and revealed some amazing things. Most recently they have undertaken an exciting project investigating the archaeology of the Machars.

It was however announced earlier this year that The Whithorn Trust and Whithorn Story Visitor Centre may be closed due a lack of funding, a situation which leaves the future of this significant heritage centre and many important artefacts it curates uncertain. Importantly for the visitor experience The Whithorn Story Visitor Centre forms part of a hub with the Historic Scotland Whithorn Priory and Museum.   The stones in the museum were redisplayed in 2004 in partnership between Historic Scotland and the Whithorn Trust, with Heritage Lottery Funding.

An important relationship between people and the heritage of the Machars is in danger of being severed.

Please help by adding your support to the petition to save The Whithorn Trust.

Save The Whithorn Trust

In the current economic and political climate, we need to value and support our museums and heritage centers.  Like other forms of art and culture, which make our society far richer and more vibrant, they can be soft targets at such times.  As places of communal memory, we are poorer without them and our relationships to the landscapes we inhabit will be even more difficult to maintain, grow and enhance.

The Whithorn Priory and Museum micro site has further complementary information about Whithorn and the Machars.

The Bothy Project is transforming a stalled space in Glasgow: the site of a Glasgow City Council Cleansing Department building.  I first stumbled across the space three years ago and had not been passed it since.

Returning from The Whisky Bond (the red brick building partially seen in the distance), I was drawn to the space again by the presence of a newly painted wall. 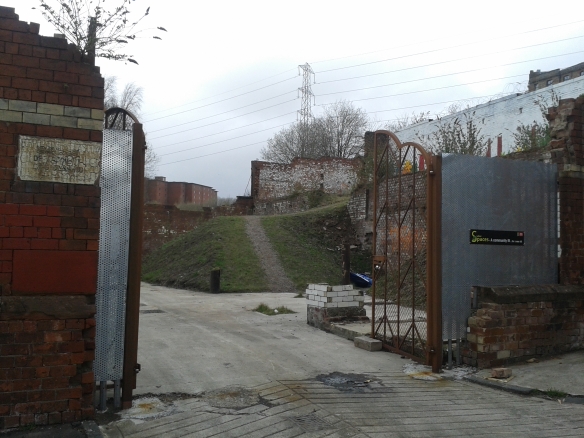 A shipping container is being converted into a studio space for artist residencies, with exhibitions in the walled garden. I really look forward to seeing what else happens in this newly emerging place (they were building a great looking pizza oven today !).  It already looks like its going to become a great example of how a stalled space can become a creative hub.