As I explored the CGAC collection, synapses sensitized to entanglements with a deeper past, I encountered a few pieces by artists who are clearly informed by their relationship to the ‘archaeological’ which I hope you may find of interest: 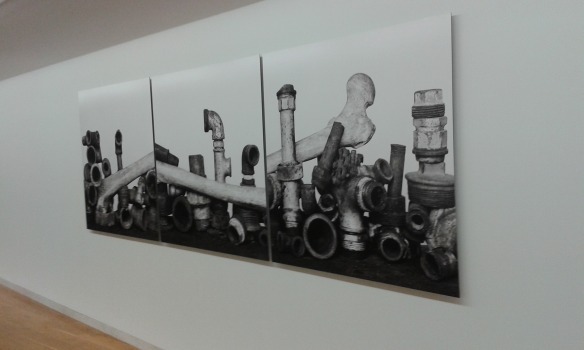 In the tryptich by Manuel Vilariño, the landscape with bones is a series of pipe joints and a human femur.  Understated tone and texture make it at first difficult to immediately distinguish the artefactual from the skeletal. Yet the unique qualities of bone, emphasized by the composition, evoke a subconscious understanding that something is wrong in the landscape : fragmentary and disjointed  : something of our humanity is present amongst the detritus of industry which we bear witness to. 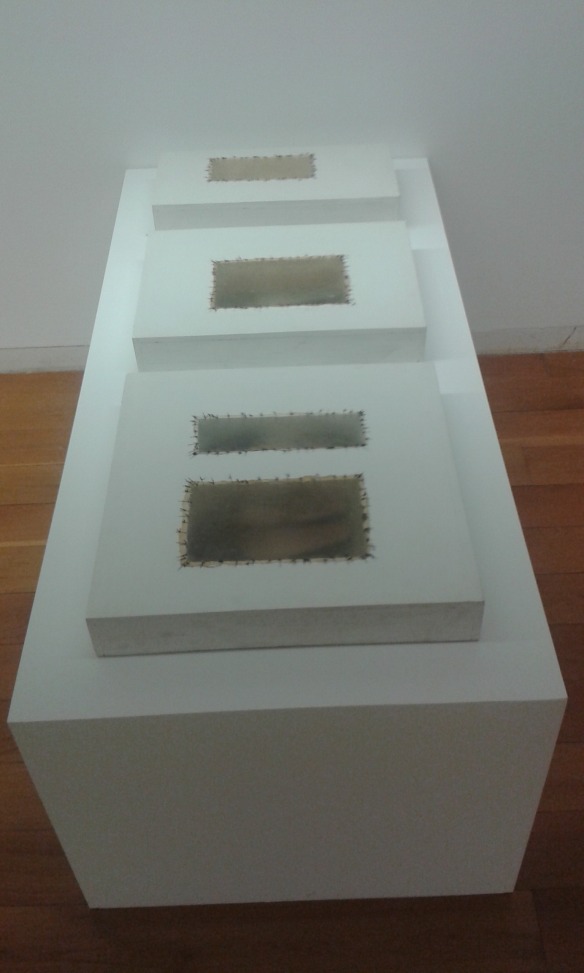 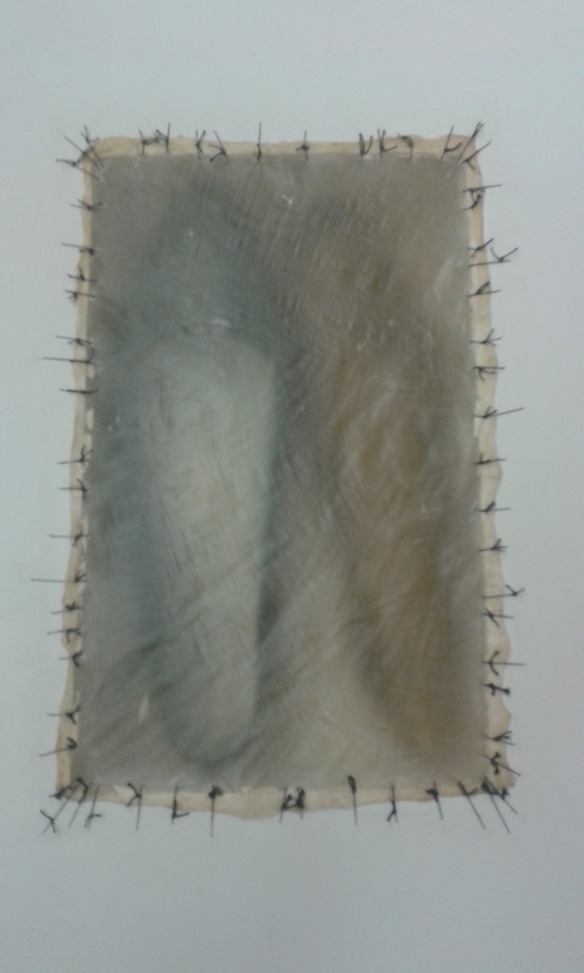 Doris Salcedo’s powerfully haunting piece presences a series of ghost like shoes.  A vellum is stitched, in an operation to seal women’s shoes : captured in an organic vitrine.  A state of being, leaving them out of focus, unresolved, trapped in the timelessness of the gallery. 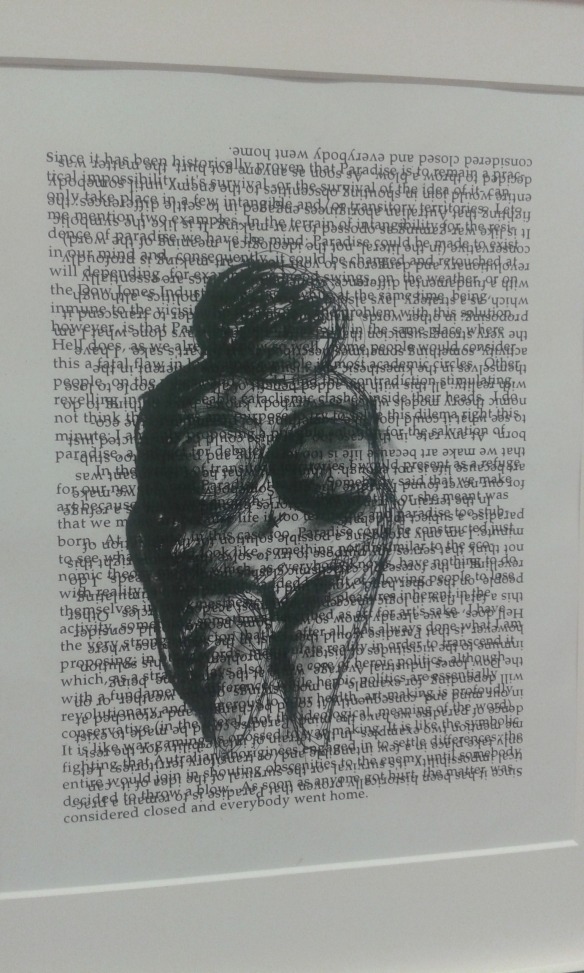 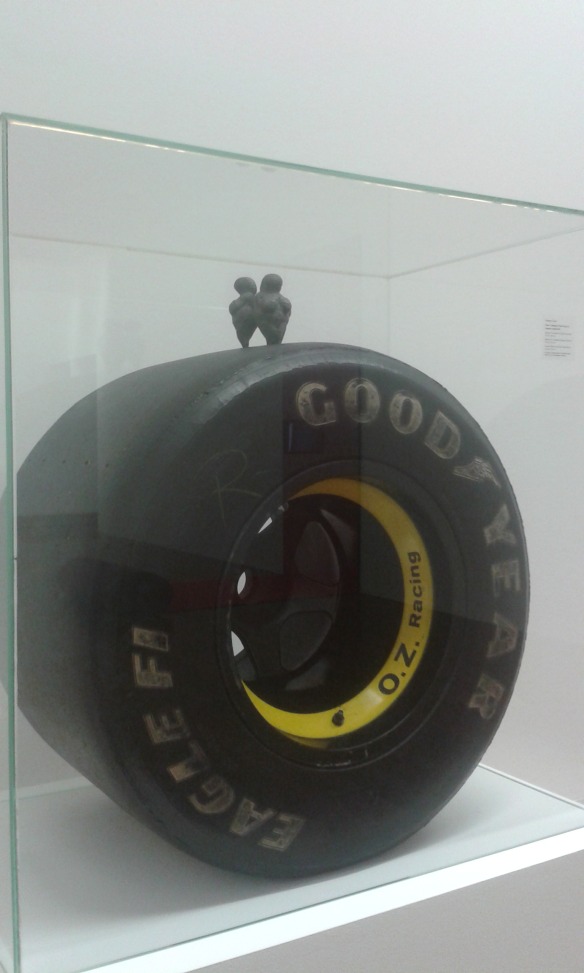 The pieces by Francesc Torres have incorporated a Venus figurine (a c 25 – 30 thousand years old ‘art’ form).  Not just any Venus figurine, however, as it would appear to be (so distinctive as many are) representations of the Willendorf figurine from Austria.  In one piece, Estudio para Da Capo, the image is drawn on text printed : text printed twice so one set is partially superimposed over the other (palimpsest like !) but having rotated the paper first, one set of text appears upside down and running right to left (confounding our attempts to read meanings).  In the other piece, Power Contested (Three Graces In Unstable Equilibrium), three Bronze replicas cluster together (evoking Neoclassical summonings of the daughters of gods) upon a racing tyre.  Ancient forms, seemingly stable, a deep rooted source of inspiration and appropriation of the female form.  Yet resting on high speed modernity, vulnerable to falling…

The pieces I have highlighted in the CGAC collection variously engaged with the archaeological (the human bone within Vilariño’s piece, the shoes within the pieces by Salcedo) or explicitly evoked prehistoric remains in their work (the Venus Figurines appropriated by Torres).

But the expression, contemporary prehistories, could as much relate a particular kind of experience of visiting a gallery space (when undertaken without referring to catalogues or labels).  The mediation of meanings (either intended or unintended) through these materialisations has much in kind with (as a prehistorian) the first encounter with an object from the distant past.  There is no other voice of testimony, no text to read, it is a raw, exposed state of response ‘to the things themselves’.  We then reflect from other frames of reference, from our experience, from our knowledge, and develop a sense of, an understanding, an interpretation of…. …. …. …. …. …. …..?

What such gallery pieces express is an ongoing dialogue which partially reveals, not a text which delivers authoritative meaning.

Perhaps contemporary prehistories are practices by which we remember the forgotten, by presencing in ways which do not privilege text, and are contingent and open to dialogue and reflection.

Such pieces perhaps challenge the authority of those who would choose we forget.

The conversation with the past should not be forgotten.

———————————————————————————————————————–
I have highlighted the pieces by Manuel Vilariño, Doris Salcedo and Francesc Torres but there were also several other works by artists in CGAC whose relationship to the ‘archaeological’ is perhaps better known, this included an aerial photographic piece by Andreas Gursky ‘Thebes, West’ and an installation by Mark Dion ‘Boxes of the Paleontologist’.
Only when I returned from the Santiago Pilgrimage did I try and find out more about Doris Salcedo’s sculpture and was not surprised to learn that there is a powerful ‘back story‘ to the piece and of the practices of Salcedo more broadly.  In Andreas Huyssen’s excellent essay on Doris Salcedo’s piece ‘Unland: The Orphan’s Tunic’ he evocatively describes her works as Memory Sculpture. To be found in ‘Present Pasts: Urban Palimpsests and the Politics of Memory’.
Equally the work of  Francesc Torres, from Barcelona, has a deeply political dimension around memory and forgetting.  Another project he was involved in comprised a photographic piece responding to the exhumation of a mass grave with a forensic anthropology team at Villamayor de los Montes and was entitled ‘Dark Is the Room Where We Sleep‘.
A good account of the changing inter-relationships between artists and the prehistoric can be found in ‘Overlay: Contemporary Art and the Art of Prehistory’ by Lucy R Lippard

Landscapes are a dynamic complex sets of relationships and interactions between natural and human factors, tangible and intangible.  Landscapes always change, some times almost imperceptibly in a human lifetime, other times there is rapid flux which we can readily see.  At times people have actively created new forms of landscape, in some cases by physically transforming them and in other cases by changing perceptions of them.

The future of cultural landscapes is explored in a recently published volume New Cultural Landscapes edited by Maggie Roe and Ken Taylor.  The volume emphasises the lived nature of the multiple relationships, values and qualities which comprise all of our landscapes.

Many of the papers in the volume highlight the active role people have in (re)imagining and (re)creating new cultural landscapes.  Exploring a wide range of issues and case studies, from: the remediation of post-industrial landscapes; the ‘rebranding of landscapes’ by an ecomuseological approach; the transformative nature of conflict on landscapes; the appropriation and use of wastescapes and disasterscapes; the role of film tourism in creating commerical and dream landscapes; landscape urban – rural interactions in developing countries; the rapid growth of New Urban Landscapes in China; through to the challenges of increasingly rapid change in landscapes due to climatic pressures.

For those of you who are interested in the lived and dynamic nature of landscapes, this academic volume, is a useful contribution to the ongoing debate about how we value, manage and enhance all types of landscape.

You may also be interested in Resilience and the Cultural Landscape.