Five days and fifty miles I traveled by foot.

Narrating the journey, as a linear movement would be possible, but my experiences were more complex, more entangled, with a range of eruptions and encounters in the changing landscapes which continue to resonate.

Some sense of the journey may be gained, however, through the images below, some of which were incorporated in a joint exhibition held in Caithness, Scotland, in 2016.  Each image, a compound of particular serendipitous conditions, mediated by subsequent selective sensibilities, represents moments of revelation.  Brief entanglements, enchanted, with the rich flows of time and the dynamic inter-relationships between people, other species and landscapes.

The Flow Country, a patch work of Lochs and Lochans, stitched by burns and rivers, often offered views to the distinctive peaks to the south of Morvern, Maidens Pap and Smean.  These peaks guided my journey, topographic beacons, which drew me onward and inwards. 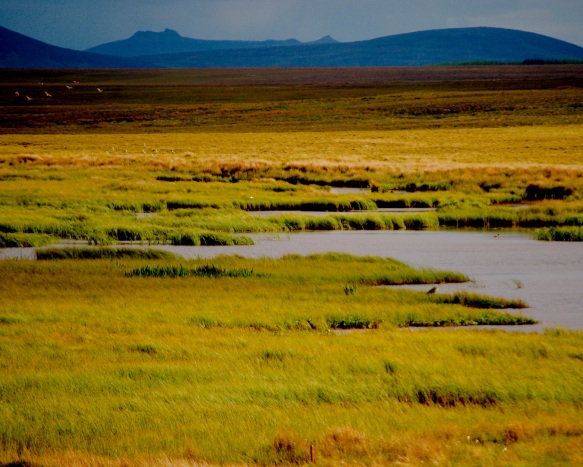 Bird-land encounters were prevalent, when I couldn’t see birds their song was ever present, even at night my sleep was disturbed by their ghostly clicks and calls.  Only once did bird-land go silent, during my last morning heavy rain confined me to the tent, but it was the energetic call of song birds which told me it was time to depart.

Before my journey commenced, I encountered the realities of the avian beach, where angels wings littered the foreshore : stripped of flesh, divorced pairs of wings, perhaps the work of skuas.  Five peewits mobbed a buzzard ; a heron leaving the Strath, frantically avoids being pulled down by gulls, its elongated body bending unnaturally in utter terror desperately dodging the beaks of kindred.

Stooping for water at Allt nam Beist (Burn of the Beast) there is a huge splash nearby.  I quickly turn to see an Osprey breaking from the water, a fish hanging from its feet, it ascends and turns to the south : I did not exist.

The loch is fringed with deposits of sand, beneath which is sealed peat, erosion reveals the stumps of ancient trees.  No arboreal fantasy but revelations of possibilities.  Moments later, fragments of flint, reveal themselves from where these deposits are being gradually worn by the gently lapping waters.  The forms of the worked flints suggest they were left by hunter-gatherers who also rested at this location, perhaps 7000 years ago.  We probably drank from the same burn, in which small fishes still leap to catch flies, and rested at the shores of the same loch : I almost heard the whisper of their voices.

Abandoned farmsteads in the uplands were prevalent, part of a  widely known story of the depopulation (the deliberate removal of people and change of landscapes) of Caithness and Sutherland, and much of Scotland.  Sheep played their unwitting role in this story, introduced by landowners, with landscapes and communities being re-organised in part to accommodate them on the land in the 19th century.  It seemed appropriate to sleep where the sheep had been penned, so for one night my tent nestled within a small sheep fold. 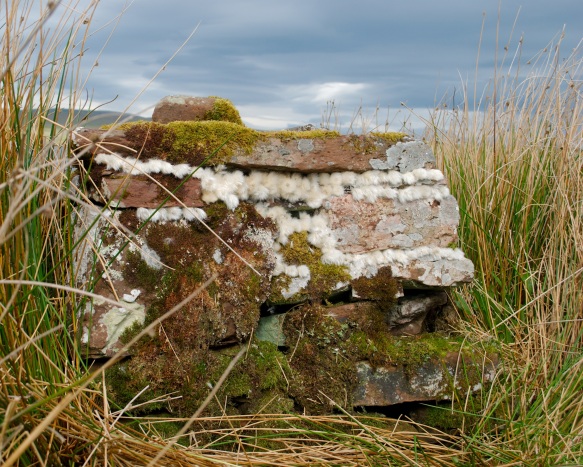 The low red sandstone walls gave some shelter to the wind which whipped along the Lochside.  Then I wondered, it was a very small pen, perhaps too small for sheep.  Earlier inhabitations are also found in the uplands, hut circles perhaps four thousand years old, within which I think I slept.   I wanted to mark my brief dwelling at this spot, cotton grass, evocative of fleece, nestled in the cracks of the walls.

Many of the longhouses (and shielings) have stone boxes built into the walls.  Aumbries perhaps for cool storage of foodstuffs, or safe display of treasured items.  Years later the soil reveals, the signs of former fertility, a flush of nitrogen, often ring such settlements, a sharp reminder of our loss : stinging nettles (Urtica dioica).

Those rich deposits can also be found in buildings which have been abandoned as sheep shelters – hard won ground, hard won places, lives and loves no more… !

Deer-land, dear-land, our-land.  For much of my journey I traveled through deer-land.  At first it was their multiple footprints, along shared tracks, least resistance across ground that you would sink deep in peat and water, still used by estates.  Then I encountered the herd, aggregations of stags and larger groups of does.  They watched, with flick of ear and rise of nose, my every move.  Brief silhouette on skyline, flash of white tail, gone.  A few watched longer, the last small groups of does and hinds, tenderness grazed patiently if I kept a respectful distance.  I continued to follow the deer paths, a different form of route along edge of river and burn, their path cutting more directly across loop and meander, a quicker more confident travel which I learned to trust.   One night I was woken by the grumph and roar of stags, so close it seemed they were next to the tent.

Shelter can be found in these lands, a range of corrugated iron bothies, huts and boat houses.  Often a focus for hunting or fishing they are open to all who respects the spaces provided.  In some cases, a chronology of rubbish suggests it has been 20 years since properly used.  Brown rusted skeletal beds, and broken seats greened with age, a reminder of comfort and company long afforded by such places to those who make the journey.

A tradition of visitation was marked upon the wall of the few I visited, written in pencil, etched in pen and scratched with pen knives, a stratigraphy of dates and names going back to at least the 1930’s.

R Hendry 11th May 1931 Killed Fox Last Night – there is a reality to this landscape, foraged, browsed, managed and changed with time.

My preconceptions of the Flow Country as empty lands was being challenged by the encounters, with the liquid landscape, I could only readily traverse where others had created track and bridge.  Many of the burns were wide and deep enough that a bridge was needed to cross, and if not maintained routes will shut and landscapes become less accessible.  In one case, I balanced precariously, with a full pack, on old railway sleepers which were the only remains of the long gone timber bridge.  Upon which I couldn’t turn back and if I continued was likely to take an early bath.  They bounced and swayed as I slowly edged over, not believing I actually made it to the other side. 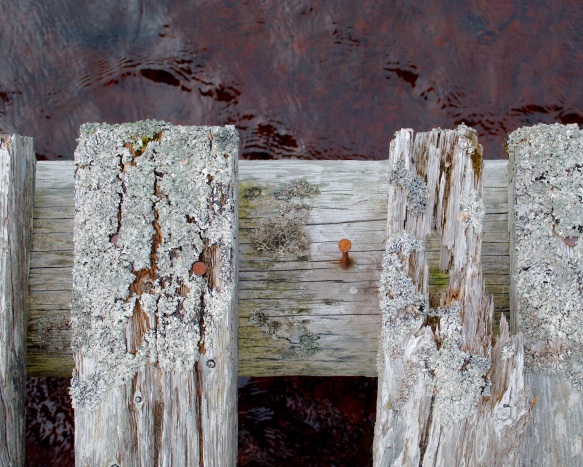 Lichen colonises wood-land above peat quenched waters. They lead us to places of contemplation.  The aggregation of the fishers bothy, the curation and discard of meaningful journeys.

Around the huts, slowly sinking into the peat, clinker hulks rotting on the shores of distant lochs.  Small rowing boats, in the main, but evocative of the sea and a wider tradition of boat building.  Rose headed copper rivets, copper nails, plank and cauking, paddles and playful catch.

For a moment, upland water, settles on the hull of the boat.  I drift, carried on the thermals, dip and rise like the cycle of the swifts, and soar in the gyre.

Woodland disappears beneath peat and the hooves of herbivores. I flow, return to the source. 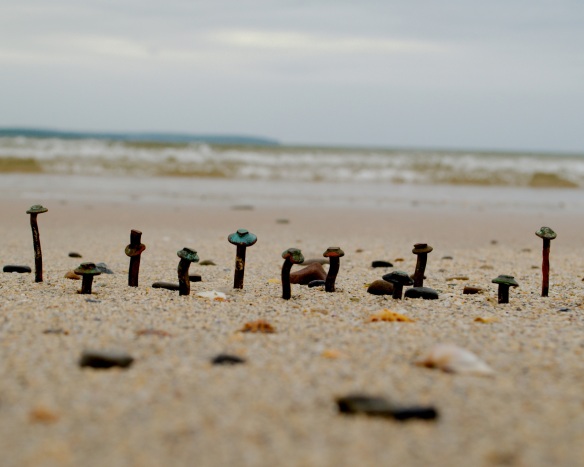 We are riveted to the changes of the foreshore, inescapably we are bound to the cycle.

In July 2016 I walked solo from Thurso on the north coast of Caitness south, through farmlands and into the watery interior of the Flow Country. Camping for four nights I arrived five days later in Dunbeath. The walk was my approach to developing content for a joint exhibition, with Ian Giles and Andy Heald, at North Lands.  It resulted in a series of photographic prints, texts and sculptures by me which responded to the encounters.

Thanks to Dunbeath Preservation Trust for kindly providing accommodation at the Old School House in the days before and after the journey.  Many thanks to North Lands for their support and to Andy and Ian for the collaboration and companionship to produce the exhibition There Is An Equilibrium Here…