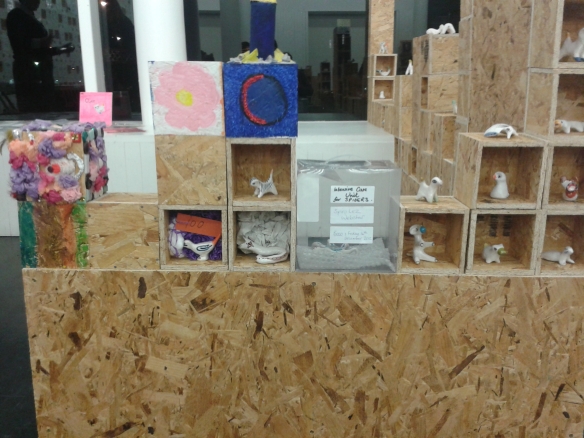 It is an ongoing public art work which has involved artist Nicola Atkinson (with Lee Ivett/Baxdendale and Love Milton Project) working with Milton, a relatively new community that does not have such a deep history as other parts of Glasgow.

One key aspect of the project has been the production of 365 clay animal figurines (wee creatures), whom members of the community have been caring for over the Christmas holiday break.  The wee creatures have just been returned to the artist and are currently on display with a wealth of other materials produced by the community, which begins a process of creating a mythical history of people and place.  There is further information about the project online, where the artist explains the philosophy of the project in more detail, but one aspect worth highlighting is the response to the relative ahistorical nature of place:

‘It is a provocation to create a new and alternate history and mythology that through participation will connect people with place.‘

Furthermore, it is striking to read that the artist is well aware of the potency of archaeological practices in contributing to creating both peoples sense of identity and place making.  The wee creatures will be purposely buried (an incavation) at Milton, creating at once an art work, archaeological site and special place for the community. The public art work Odd Numbers – Making Myths and Milton has been funded by AHRC (Connected Communities) and the University of West of Scotland.  You can see the wee creatures, and the community documentation of the emerging history of the place, for the next week at All That Is Solid, WASPS South Block: well worth having a look at.

Finally, seeing this public art work also reminded me of a strand in archaeological practice which emerged about ten years ago which involved reflection on the inter-relationships between art and archaeology.  More specifically, it reminded me of an incavation project undertaken by Cornelius Holtorf in Berlin.  This comprised the incavation of the remains of a shared meal, which subsequently became the subject of an exhibition.

Further information about Cornelius Holtorf’s archaeological incavation can be found at the project website and in the published article:

This is such a striking example of how we could make our streets far more interesting.

This is a partnership project between Sustrans and Fife Council.

The Sinclairtown Kirkcaldy junction markings are designed to change how this part of The Fairway is viewed by motorists. By creating an unconventional design at two junctions closest to where pupils cross on the school journey the designs are meant to signify to drivers that this part of the street is not an average street and that there is a need to be more alert and aware of the surroundings and other road users.

The Sinclairtown Kirkcaldy junction are design by Nicola Atkinson / NADFLY, an artist who is based in Glasgow, whose approach involved public engagement to arrive at the designs. 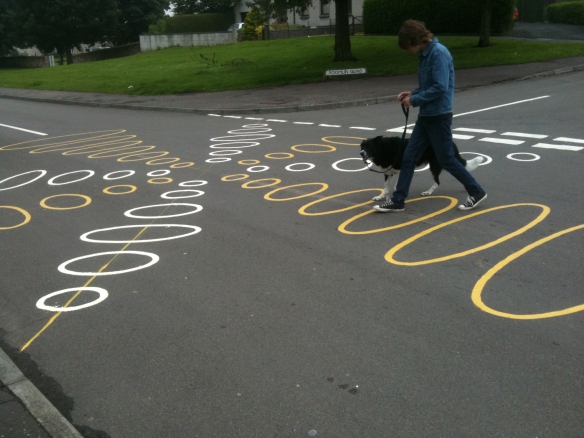 Are there any other examples of different approaches to junction markings which you can think of ?

(Many thanks to Nicola Atkinson / NADFLY for text and images)