Borne of Stone, between Sky and Water, was what occurred at the site.

The site was one I had long heard tell of.  It had intrigued me,

with accounts of mysterious carved heads on a large stone block on Craigmaddie Muir. 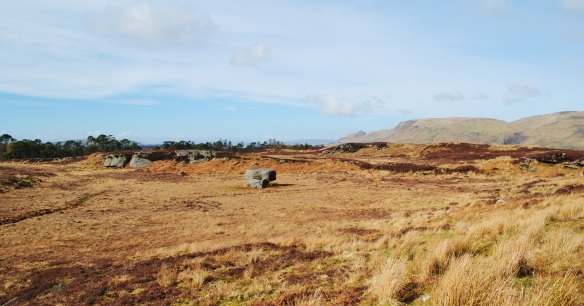 it is located at a point which allow views across the Clyde Valley to the south.  Yet

is only a few meters away from higher ground to the north which affords views to Ben Lomond and the Highlands beyond. 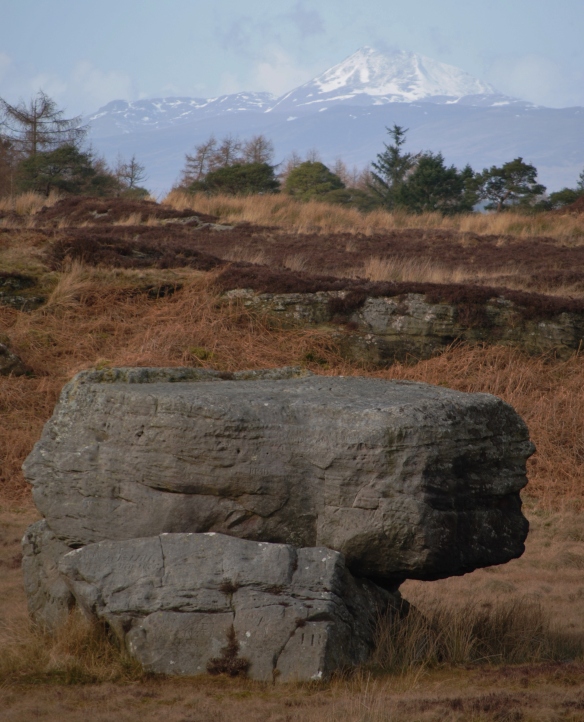 Yet, these views to the north are obscured, when you are at the site, by the basin of rock it sits within.  Scales of landscape nested at this location giving further potency to the boulders distinctive form. 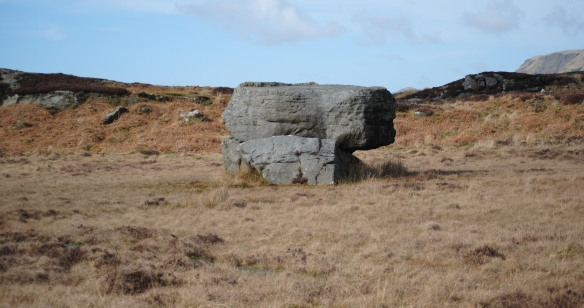 Moving closer, a proliferation of graffiti becomes apparent. Little triumphs from mortality, names and dates, still clinging from the vagaries of geological time. 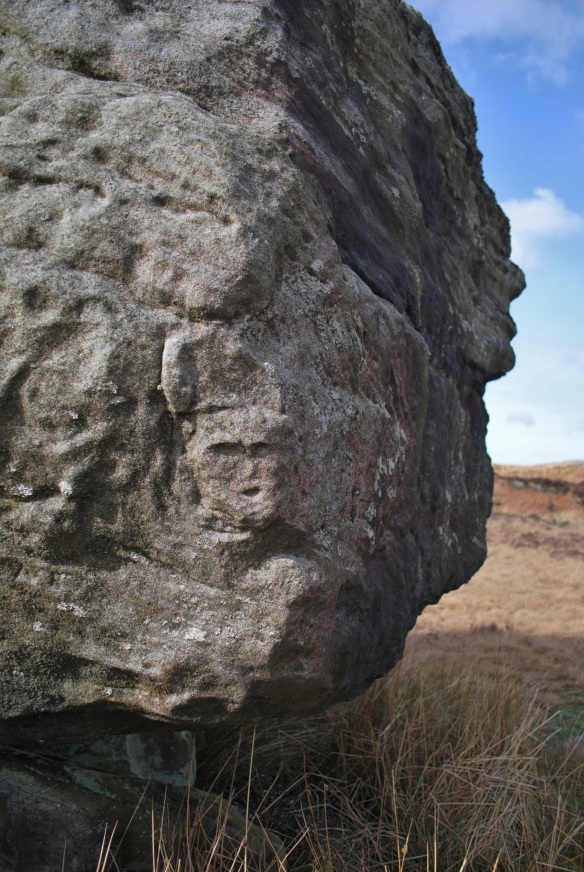 As you move around, it reveals the dolmen like arrangement of stones which form an irregular channel running broadly south west to north east. 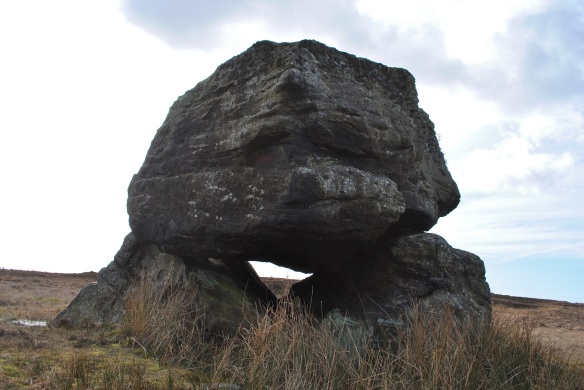 As far as I can tell, there has been previously identified nine carved heads: 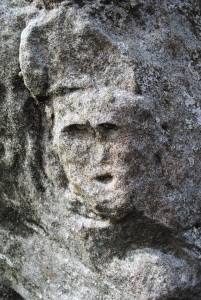 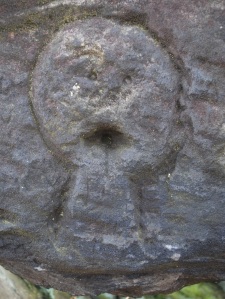 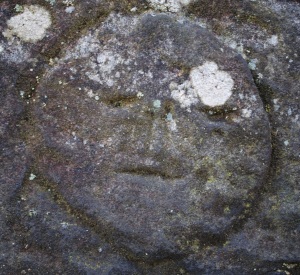 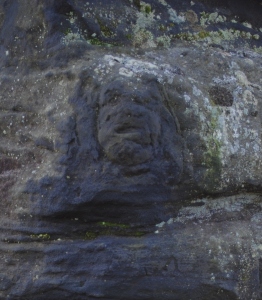 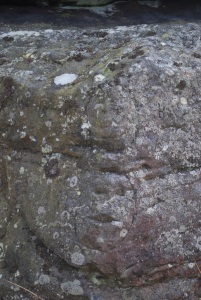 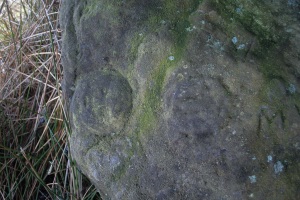 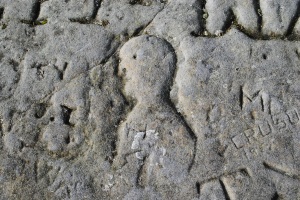 Each is distinct, with particular morphological characteristics, and each, with wear, chip  and lichen veils upon the rock surface, has signs of antiquity.  As has been noticed before, all the heads (apart from one on the upper face of the upper stone Head I) are executed on the easterly portions of the rocks.  The western ends of the stones are unembellished, headless.

This pattern suggests there was a deeper understanding about where on the rocks it was appropriate to carve these heads and as such they may have been composed or understood collectively in some way.  Together they give a sense of a pantheon of individuals, each perhaps with a unique name or association in the past.  For example, it was suggested by Alcock (1977) that Head A has a horn extending from its right side, and another may have existed on its left but is missing due to breakage. As such, he suggests that Head A could represent Cernunnos.

One (Head K) is located on the upper eastern part of the south facing stone.   It watches over you as you climb up to the top stone to visit head I.  Using a series of distinct stone cut steps (which are well worn suggesting some age) you ascend. 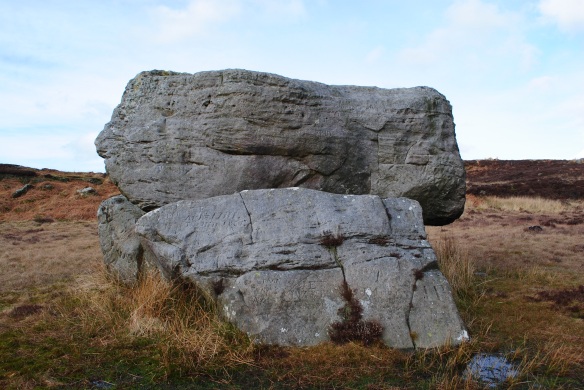 When you reach the top the highland views to the North are again revealed.

Watching this ascent, to the land of northern skies, is another visage (Head K), nestling amongst other incised lines. 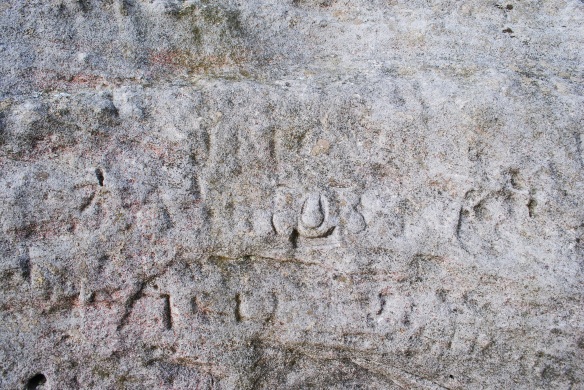 It has a distinctive mouth, cheeks appear to bulge, eyes half shut, almost smiling or grimacing at those who ascend.  Other lines above could be representations of horns or hair : but perhaps could be other earlier forms of lettering. 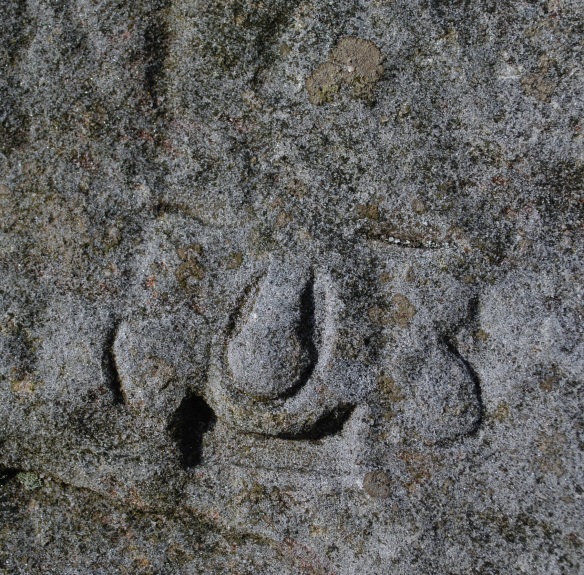 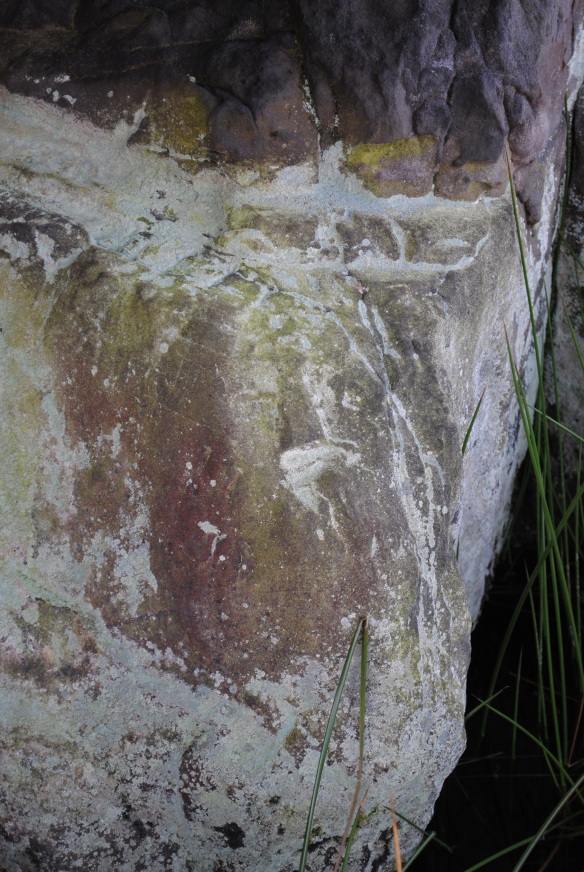 The third possible head (Head L) is within the rock passage.  The rock has been prepared to create a rectangular plaque upon which is Head L.  Rather it is more of a torso, which may also have decoration running from the neck across the chest.  Similar in form to the figure on the top (Head I), side on with marked profile, and with a variety of symbols incised to its right.  It like the figure on top (Head I) faces to the south west,  perhaps evoking distant lands. 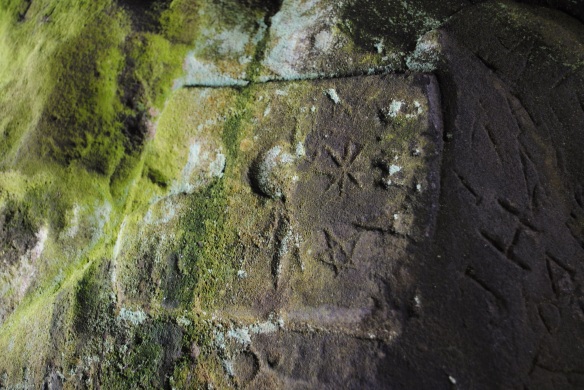 Discovery of these three possible additional heads support the trend in overall distribution being focused at one end, and perhaps emphasises the potential significance which movement through the stones may have had.  Travelling from the north-east (from a pantheon of deities) to the south-west could have been deeply symbolic and perhaps restricted to certain people or at certain times of the year.

Whoever, two thousand years later, there is still a reality encapsulated in our bodies, some shared (albeit diverse) frames of reference… 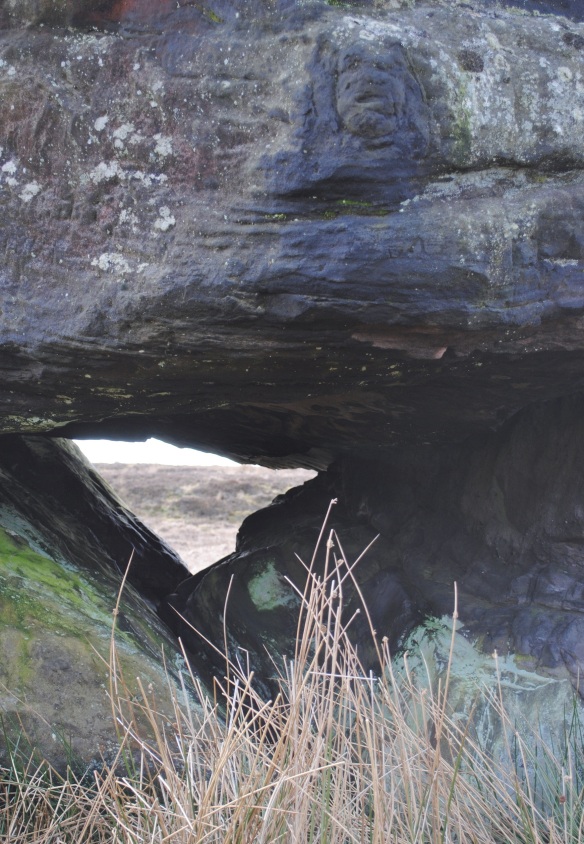 The passage is narrow and awkward, pitching the body at odd angles.. 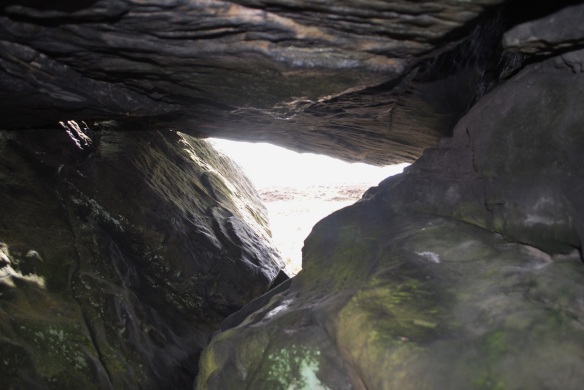 Distorted, you edge towards the light… 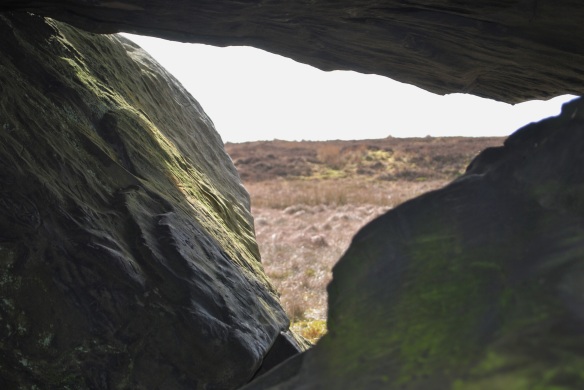 Arriving at the mouth, awaiting to be spewn out.  In disorientation… 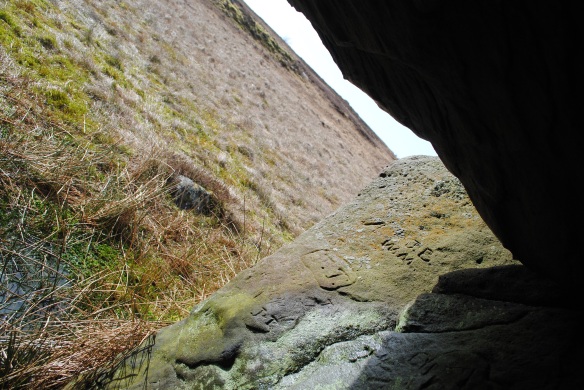 …I realised, as I splashed out into the sunlight, that below the rock passage was standing water.  I had travelled through rock and over water. 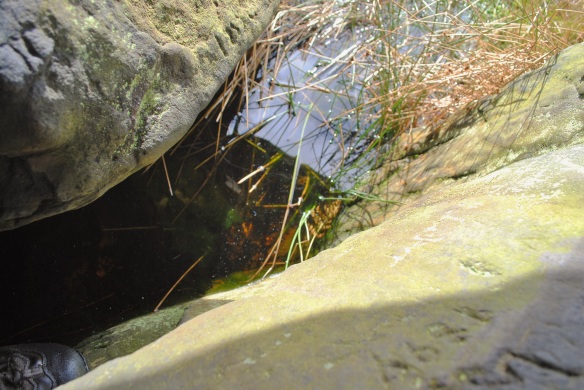 Borne of Stone, between Sky and Water, was what occurred at the site.

There is a slightly uncertain tone to his writing, perhaps from finding himself sandwiched between Ure’s accounts of Druids and a nagging doubt as to whether these were relatively modern embellishments he was publishing about.  He concluded however ‘Whatever is thought of these arguments, one conclusion seems inescapable: that the faces on the Lifts deserve more of archaeologists than to be overlooked or dismissed out of hand.’

There is no doubt, to my mind, that this site has had significance in the later prehistoric and / or early historic period, potentially a location of cult and ceremony.  It certainly has some resonance with sites such as Dunadd where rituals of place and kingship may have been undertaken in the early historic period which incorporated other forms of carving.

Indeed, the close proximity of Auld Wives Lifts to earlier ceremonial monuments has long been recognised, with a Neolithic chambered long cairn only 500 metres to the east.   At that location, a similar inter-relationship with landscapes to the north and south is also experienced.  Also with the chambers in the cairn, people in the past would also have experienced travelling from light to dark and being returned to the light again.  We know from sites elsewhere that people in the later prehistoric and early historic periods revisted and reused Neolithic and Bronze Age ceremonial sites.  It is possible then that how Auld Wives Lifts was understood and was used two thousand years ago made reference to earlier sites and rites.

Ure, D 1783 The History of Rutherglen and East-Kilbride; Published With a View to Promote the Study of Antiquity and Natural History.

Further information can be found at RCAHMS Canmore.

If you are going to visit the site, please do not touch or modify the carvings, they may have been there for 2000 years.