The ruined church at Kilmuir, Troternish, Skye, is prominent in many views from the land, and can appear as a grim sentinel of Camas Mor Bay. It is said to have been used to navigate from the sea.

On the upper floor, before it had been abandoned and robbed, ships had been inscribed in the plaster… 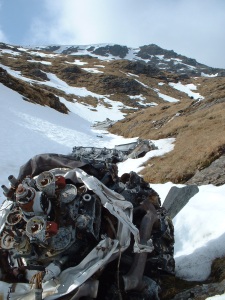 Mountain landscapes are often valued for there remoteness, relative inaccessibility and degrees of ‘wildness’.  I was thinking about this recently in relation to the times I have spent walking up and down mountains in Scotland, when I remembered that my first post showed a picture with a plane over Glencoe.  I had almost forgotten on a solo walk up Ben Lui that I had another encounter with a plane.  It is ironic that so high up, so far away, is where it brings you closest to the vehicles which have opened up such landscapes to a global accessibility.  In earlier cultures, cosmologies would include aspects such as boats or horse drawn chariots pulling the sun and moon across the heavens.

At the Edinburgh College of Art there was a series of conversations about the inter-relationships of artistic practices, embodied experiences, and the entangled nodes of memory in landscapes which they are sustained by and sustain:

Angela McClanahan began our journey exploring relationships between archaeological / anthropological theory and the practices of land-art, starting us along Roman Roads, around Robert Smithson’s Spiral Jetty, and entangled with the lines of Tim Ingold’s writing.

Craig Coulthard discussed with Neil Mulholland some of his earlier works, before Forest Pitch.  He explained how aspects of the work had been influenced by an experience of the archaeological excavation of lines of post holes, and that while the pitch would be reclaimed by natural processes, he was aware that there would be a similar arrangement of features on the site of the performance to baffle future archaeologists. 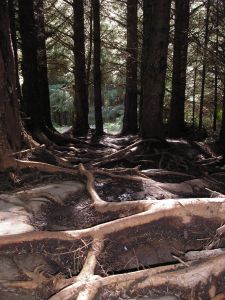 Angus Farquhar spoke with Edward Hollis about NVA’s Speed of Light. Previous NVA works such as The Path, Storr, and Half Life drew heavily on the past culture and heritage of the landscapes they were situated. In contrast, Speed of Light does not engage as directly with the culture and heritage of Arthur’s Seat.  It was purer (‘unspectacular’, with Salisbury Crags deliberately unlit): a collective audience of producers, together which mediated the topography of the hill, movement, energy of their bodies, and light, into something sublime.

Claudia Zeiske spoke of the fantastic walking projects being done by Deveron Arts.  Among these was Slow Marathon with artist Mihret Kebede, which in part responded to a traditional song describing the topography which Huntly sits.  The extent of this basin was walked as a slow marathon on one day by the community, on the next members of the community in Addis Ababa also walked a slow marathon.  Both sets of walkers were tangibly linked by a shoelace exchange…

Inspired, time to go to some favorite landscapes, and run, walk, talk with other people. 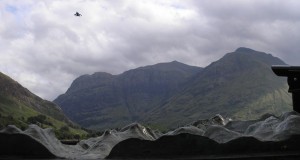 This image captures so many elements of my interests. In the distance,

In the foreground, they have been cast in Bronze.