There is a strong tradition of artistic practices, such as the work of Richard Long, which are mediated through walking.  Equally, long distance walking routes are an increasingly important way for people to explore the diversity of landscapes which can be found in many countries.  On many of these routes signage plays a significant role in guiding the walker.  In some cases, these routes are also the focus of other art works.

One example, is the Southern Upland Way in Scotland, which is the first and, at 212 miles, one of the longest distance coast to coast routes in Britain. 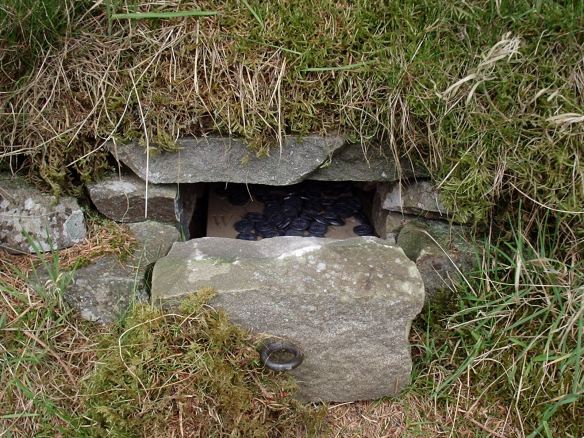 The Southern Upland Way has been the focus of an interesting arts project, Waymerks, which drew inspiration from archaeological sites along the route.  Ten years ago, ‘kists’ (stone or metal boxes) were placed at thirteen locations along the route within which could be found hoards of metal coin (merk) like tokens.  They were designed and produced by sculpture John Behm, who incorporated images into the tokens of a range of artefacts and sites that related to the landscapes the Southern Upland Way runs through.

A New Hoard of Waymerks was established in 2007 with a new set of thirteen tokens with designs produced by school children (details can be seen from a trail leaflet) and artist designed ‘Kists’.   It would appear that the supply of Waymerks ran out a couple of years ago but it has been a few years since I have walked along the route, so I do not know what can be found still….

Has any body found a Waymerk recently ?