Sólfar by Jón Gunnar Árnason is a striking piece of art in the public realm known to many, often pictured back dropped by stunning sunsets.  Its graceful form undoubtedly evokes the Norse ships which brought settlers to Iceland.  Indeed, perhaps the name Sólfar (Sun Voyager) playfully refers to the much debated sunstones (sólarsteinn) potentially used to aid their navigation.

I was just relooking at the photos of Sólfar I took early one morning whilst exploring Reykjavik.  To my surprise I spotted other travelers on the prow and stern of the vessel which I hadn’t noticed when I was taking the photographs.  So intent was I on the art piece that I had shut my eyes to another important aspect of the landscape of Reykjavik. 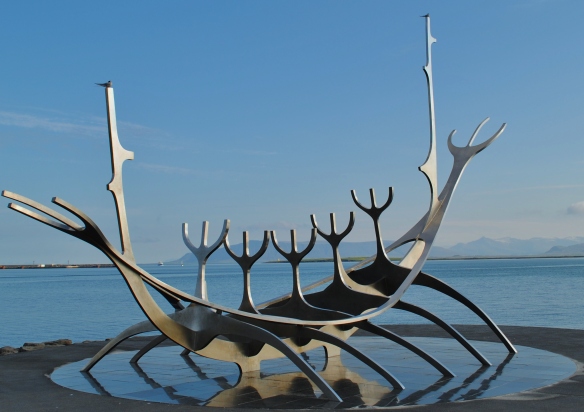 These stowaways had no need for a vessel.  These perched Arctic Terns, called Sea Swallows by some, have a remarkable migratory cycle, travelling approximately 80,000 km a year to ensure better weather.

Ironically, later on that day, despite my inability to have spotted the Sun Voyagers on Sólfar, I spent time photographing the Arctic Terns as they flew playfully above Reykjavíkurtjörnin, one of the photos of which I have inserted above.