The ability to transform materials can have an almost magical quality.  There is great skill to be able to source metalliferous ores, smelt them to produce metal and then cast to produce complex objects.

When a Bronze sword was removed from its, typically clay, mould…

its edges were trimmed, sharpened and blade polished.

A wooden hilt and pommel may have been attached.

If Bronze Age metalwork broke (or was no longer desirable) it could readily be recycled.

Melted down and recast in a different mould. 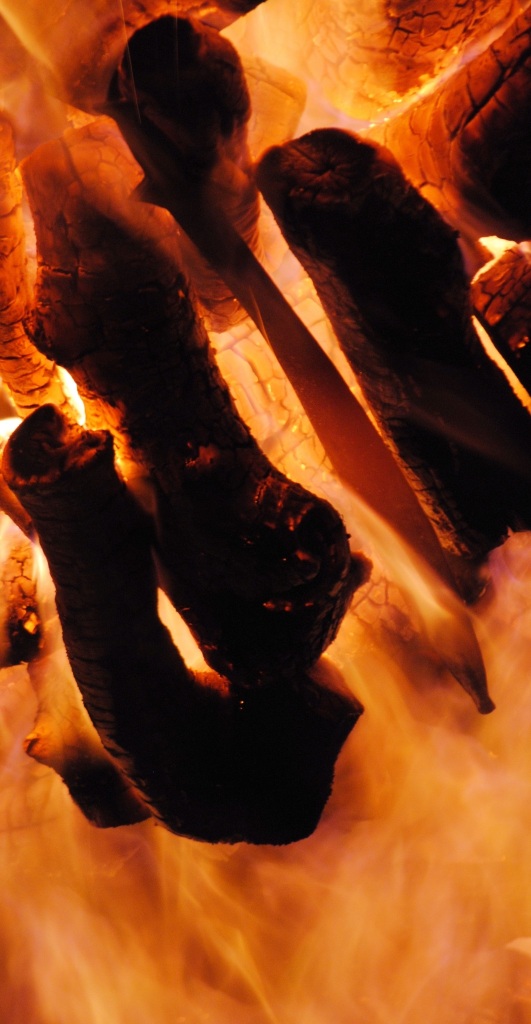 If such objects are not repaired, reused or recycled, they can potentially drop out of the cycle, found by archaeologists, corroded green with time.

When recovered properly another cycle of study and learning commences.

The Bronze Sword cycle above relates to a Wilburton type sword,  a type in production some time around c 1000 to 900 BC.  About this time Iron production commenced and cycles of production and recycling which may have taken place in the United Kingdom for about 1500 years before were challenged by new powers.

During Burning the Circle 2014 the Bronze sword was placed on the central ‘pyre’ structures which burned fiercely for nearly four hours, and then smouldered to nothing during the remainder of the night.  The broken and fragmented remains of the sword were excavated the next morning, amongst the broken parts were hundreds of small spheres of Bronze.  These spheres indicate that, in the heart of the fire temperatures reached c 950 degrees centigrade, at which point parts of the sword turned liquid.

All images are of activities taking place at Burning The Circle, apart from the hafted polished sword which has been kindly provided by Neil Burridge.

7 thoughts on “The Sword Cycle”